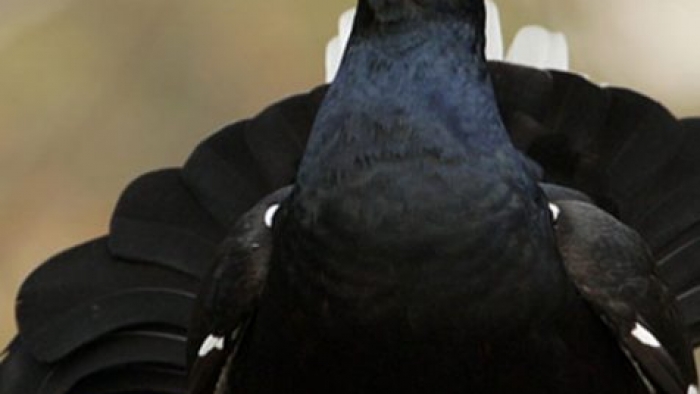 by Luciano
with no comment
NewsStories From The Trails

WILD GROUSE COURTSHIP RITUAL AT THE BRINK OF DAWN

It’s 2.30am, still dark, my brother and I are getting ready to reach the Mount Rest hoping to catch Wild Grouse courtship.

We leave Treviso behind and head towards NE, Friuli Region. After passing Sequals and Meduno, we head deep into the valley, passing a black shadow in the shape of cape. It’s Chievolis Lake, which now is completely covering once picturesque mountain village of Redona, with its ruins occasionally visible at the low tide. Further ahead, we pass through silent streets of Tramonti, our maternal ancestor’s native village. The car’s wheels are slowly passing through the hairpin turns of Mount Rest.

We finally reach the col at 4am, still feeling winter cold in the early May’s morning. In 10min and we are on our feet. Our trail takes us through enormous boulders, rolled down from the mountains, which are invading the path. In many parts the mule track is broken, bended, as if the mountain itself, with a thrill of pride was trying to shake off that old, twisted wound.

Carefully, we walk through a wide strip of snow, that is still there heading straight down to the underlying overhanging rock.

The morning light is coming up, showing our footsteps in azure, firmly pressed, step by step. The black of the night is losing its power, slowly being dissolved into a cobalt blue.

At 5.20am we reach the bottom of the wide sloping plan, which preludes the Mount Rest peak. We pass by the old cattleshed, abandoned ages ago by the looks of it. Only a tiny shelter remains ready to be used as a night refuge.

We continue to climb higher, over the steep grassy shoulder that will take us to the top, from where we would be able to watch the grouses mating ritual live. From there we observe a herd of chamois, that smelling us from the distance, quickly fades into the woods.

We go up the ridge as fast as possible, staying out of breath once we reached the peak’s bottom. This is the best position to observe the Capercaillies. It seems that we might have arrived late, as only a few of those incredibly looking, clumsy birds appears for a show. Stretched out on the grass we observe their courtship ritual: a real gear done with high head and chest out, emitting guttural sounds rather low. Still considering ourselves very lucky.

Far away, in the distance towards Austria, behind the Carnia’s Alps, the sky turns into red and orange, and as a huge fire begins to burn above our heads, as the Sun’s sphere powerfully appears to give light to all forms of life. Silently, in reverence like ancient worshipers, we witness the rising of the star. At last we reach the peak, and look around us to absorb in this fantastic mountain scenery. Out of my rucksack I pull the Tibetan bell and hit it! Its mysterious sound expands its vibrations up in the air. My way of greeting this bright morning.

We use cookies to ensure that we give you the best experience on our website. If you continue to use this site we will assume that you are happy with it.Ok